How to Get Your Lawmakers to Listen

Posted on 28 November 2018 by The Hartford Guardian

You did it! In this month’s midterm election, you and a whole lot of your fellow voters turned out to the polls to make your voices heard. But you’re not done yet. Voting is just the beginning!

The User’s Guide to Democracy has always wanted to help you become not only a more informed voter, but also a more engaged citizen. So, with the winners declared, how do you get your elected representatives in Washington to listen to your voice now?

At a live event on Nov. 13 with the New York Public Library, Derek Willis (my colleague here at ProPublica) and Paul Kane (an ace Congressional reporter for The Washington Post) tackled this question with the help of a panel of Capitol Hill insiders. The event, called “Irregular Order: How Congress Really Works,” was moderated by comedian/actor/writer Wyatt Cenac.

James Wallner, senior fellow for the think tank R Street (and a former Republican Senate staff member); Lindsey Cormack, Stevens Institute of Technology assistant professor of political science; and Stephanie L. Young, communications director for When We All Vote (also a former Democratic House staffer); explained how to get lawmakers to listen to you and act on the issues you care about. 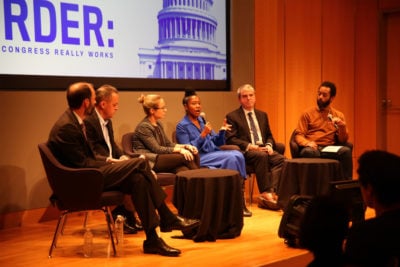 Even as Congress seems stuck, there are still things that you can do to influence your lawmakers. Here are a few suggestions from the panel:

Read More From the Series

A User’s Guide to Democracy

Congress Works For You. Here’s How to Be a Better Boss.

“We talk about advocacy groups like they’re a bad thing, but it’s usually just the ones we disagree with,” he said. “They have people who care about the same issues, who focus [on them] and are paid to go down to D.C. They make life difficult for members; sometimes they help members. … See what they’re doing and try to participate with them. Their voice is going to amplify your voice, and it’s going to make it harder for Congress to ignore the issues that you care about.”

One thing many advocacy groups do is lobby Congress, both by encouraging members to visit their representatives and by hiring their own lobbyists. You can find advocacy organizations working on issues you’re interested in using Represent’s database of lobbying arrangements.

You can watch the full discussion here, thanks to the New York Public Library, or listen to it on NYPL’s Library Talks podcast. I promise, not only will you learn something, you’ll laugh too.

We’ve come to the end of the User’s Guide to Democracy — but, hopefully, this marks the start of your increased participation in our system of government. From Representto the Facebook Political Ad Collector, you have tools to track what your representatives are actually doing, as well as tactics to hold them accountable. Don’t hesitate to use them. And, remember: Congress works for you.

This was first published on Propublica.org. Cynthia Gordy Giwa is ProPublica’s marketing director.