No, Turkey Doesn’t Make you Sleepy – but it may Bring More Trust to Your Thanksgiving Table

Posted on 20 November 2018 by The Hartford Guardian

‘Tis the season for giblets, wattles and snoods – oh my. On Thanksgiving and Christmas, Americans consume about 68 million turkeys – one for about every five of us. In fact, 29 percent of all turkeys gobbled down in the U.S. are consumed during the holidays.

And where turkey is being eaten, there is inevitably talk of tryptophan – a naturally occurring chemical found in turkey and other foods. This building block of protein often takes the blame for eaters feeling sleepy soon after the Thanksgiving meal.

Science has cleared tryptophan, though – it’s not the culprit when it comes to drowsiness after the feast. There are far more important factors leading to those post-turkey comas, not least of which is my Uncle Clarence’s story about parking at the airport. Add that to free-flowing booze combined with a load of carbohydrates followed by plenty more booze and you have a foolproof recipe for dozing off on the couch. Turkey, chicken, lamb and beef all contain roughly the same amount of tryptophan – ranging from 0.13-0.39 grams per 100 grams of food – yet the sleepiness myth has never surrounded those other foods. 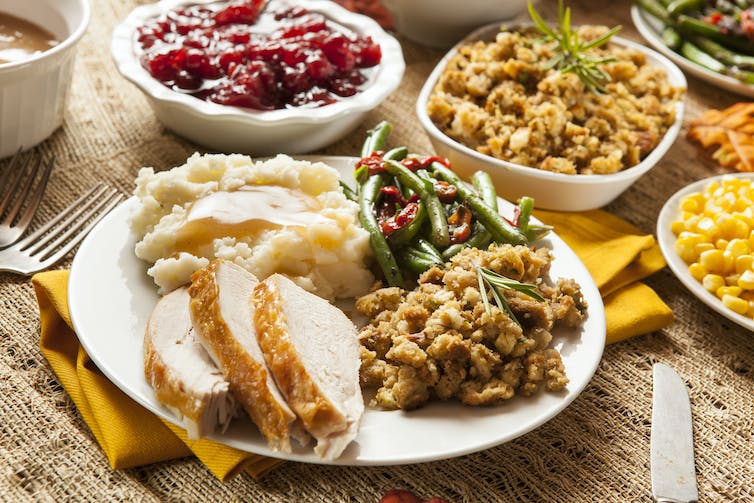 Overeating and drinking are more likely at the root of your post-feast nap. Brent Hofacker/Shutterstock.com

So tryptophan is off the snooze-inducing hook. But researchers in the Netherlands suggest it does have a different psychological effect: They’ve discovered that doses of tryptophan (chemically known as L-tryptophan and abbreviated TRP) can promote interpersonal trust – that feeling you get when you look somebody in the eye, shake her hand and think, “I can cooperate with this person and she would reciprocate.”

In a study published in the journal Psychological Science, pairs of volunteers were each given an oral dose of 0.8g of TRP or a placebo. For comparison, a 100g standard serving of turkey about the thickness of a deck of playing cards contains about 0.31g of tryptophan.

Each duo then sat in separate cubicles and played a game where one person (the truster) was given US$7 and had to decide how much to transfer to the other person. The transferred money was then multiplied by three and the trustee could give back part of the tripled money.

The more money you’re willing to give away in the first place, the greater your return in the end – but you have to trust the other person to cooperate. A very simple and profitable game if played right.

The researchers found that the TRP group gave $4.81 on average and the placebo group offered only $3.38. This is a sizable 42 percent increase in transferred money between the two groups.

So what’s going on? Here’s the brain science behind how the tryptophan-trust connection works.

TRP is an essential amino acid found in many foods including eggs, soybeans, chocolate, cheeses, fish, nuts and, of course, turkey. The brain region associated with interpersonal trust – known as the medial prefrontal cortex – is powered by the neurotransmitter serotonin. Neurotransmitters are chemical messengers found throughout the body that transmit signals from one nerve cell to another.

Our bodies synthesize many neurotransmitters from simple amino acids which are readily available in our food and can be quickly converted in a small number of biosynthetic steps. The neurotransmitter serotonin is controlled in part by the release of TRP. This means that as you increase levels of TRP you’re able to release serotonin in the brain region specially designed to process trust. Think of a flashing neon sign that reads “trust this person, trust this person.” 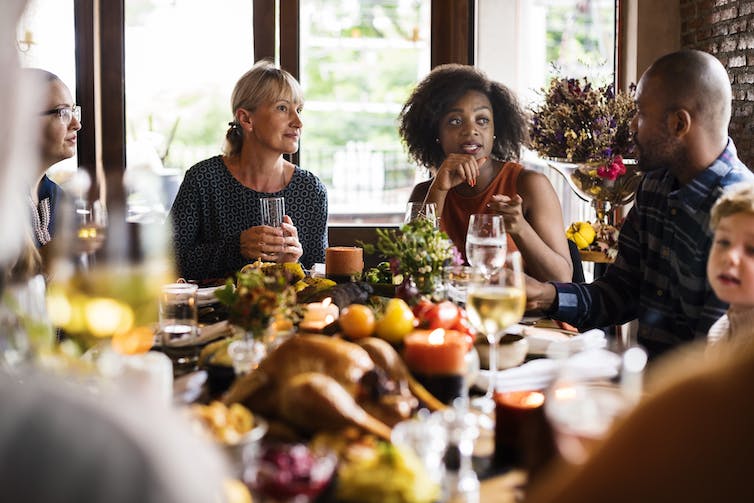 A plate of turkey won’t convince you to buy into Cousin Gerald’s pyramid scheme. Rawpixel.com/Shutterstock.com

Keep in mind, however, that our decisions to trust or not to trust do not rely solely on ingesting TRP. In the real world we take into account personality factors, how well we know someone, previous cooperation with that person, tone of voice, eye contact, body language and so on. These all have a hand in shaping the conscious and unconscious rules that govern our pro-social behavior and trust preferences.

So this holiday season, eat your turkey (or salmon or cashews or cottage cheese or chocolate) and remember that few things are more pleasurable than the joy that comes from sharing a holiday meal with loved ones. Science shows us that tryptophan can promote social bonding, but there still is no substitute for giving thanks. Trust me.

Kevin Bennett is an Assistant Teaching Professor of Psychology, Pennsylvania State University. This was first published in The Conversation.